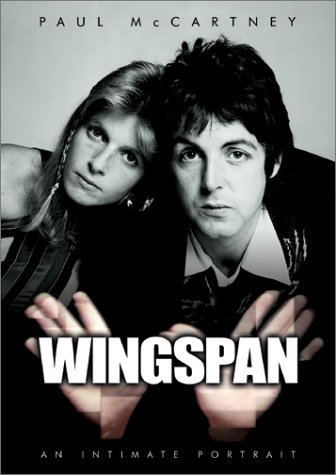 Wingspan is the inside story of how Paul and Linda McCartney dared to follow the Beatles with their rock band Wings. The story of Paul and Linda McCartney's early years together is intimately shared through series of candid conversation with their daughter, Mary. Home movies, family photos, and rare footage draw viewers into a very personal story of love and family. Combined with the against-all-odds success of Wings, Paul and Linda prove that there is life after The Beatles. 90 minutes. .com ---- Paul McCartney's account of his second famous rock band only glosses over his personal and professional life during the 1970s, clocking in at 88 minutes. Still, choice footage and photographs, along with a McCartney interview by daughter Mary interspersed throughout the program, make this an entertaining history of an often unfairly maligned group. Wingspan is also a valentine to McCartney's late wife, Linda, who was always by his side, in and out of Wings. On his insistence, Linda became part of the band, went on tour as nominal backup singer and keyboardist, and even sang lead on a song called "Cook of the House," which didn't endear her or Paul to feminists. The fact remains, though, that their marriage, which some pointed to as contributing to the Beatles' breakup, lasted far longer than either of Paul's bands. --Kevin Filipski P.when('A').execute(function(A) { A.on('a:expander:toggle_description:toggle:collapse', function(data) { window.scroll(0, data.expander.$expander[0].offsetTop-100); }); }); Additional Features ------------------- The choicest DVD bonus is 22 additional minutes of interview footage cut from the program; much of it is McCartney's fascinating discussion of how songs materialize, with "Picasso's Last Words," "Mrs. Vanderbilt," and "Let Me Roll It" played as examples. Three videos are included: "Rockestra" immortalizes an historic session involving dozens of musicians, while "Jet" and "Let 'Em In" are taken from McCartney's concert film, Rockshow. --Kevin Filipski See more ( javascript:void(0) )
Show More
Reviews