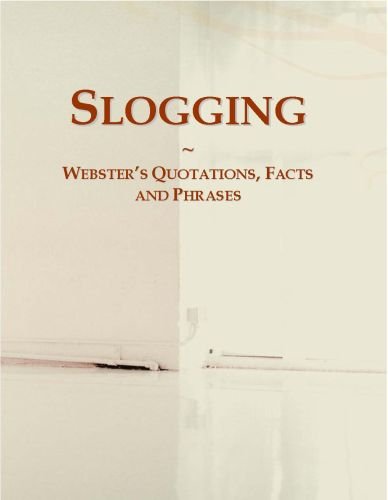 Ever need a fact or quotation on "slogging"? Designed for speechwriters, journalists, writers, researchers, students, professors, teachers, historians, academics, scrapbookers, trivia buffs and word lovers, this is the largest book ever created for this word. It represents a compilation of "single sentences" and/or "short paragraphs" from a variety of sources with a linguistic emphasis on anything relating to the term "slogging," including non-conventional usage and alternative meanings which capture ambiguities. This is not an encyclopedic book, but rather a collage of statements made using the word "slogging," or related words (e.g. inflections, synonyms or antonyms). This title is one of a series of books that considers all major vocabulary words. The entries in each book cover all parts of speech (noun, verb, adverb or adjective usage) as well as use in modern slang, pop culture, social sciences (linguistics, history, geography, economics, sociology, political science), business, computer science, literature, law, medicine, psychology, mathematics, chemistry, physics, biology and other physical sciences. This data dump results in many unexpected examples for "slogging," since the editorial decision to include or exclude terms is purely a computer-generated linguistic process. The resulting entries are used under license or with permission, used under fair use conditions, used in agreement with the original authors, or are in the public domain.
Show More
Reviews